The 27-year-old has rarely featured for the Magpies after he picked up an injury in November against Watford, makingjust five appearances in the proceeding months, all as a substitute. According toThe Chronicle, it has been suggestedthat a £20m offer is on the table for Shelvey from the​Hammers,who were heavily interested in the Englishman in the January transfer window thoughNewcastlewere not interested in letting him go.

It’s no secret that the Magpies are not the biggest spenders under owner Mike Ashley, and manager Rafael Benitez, who’s contract expires this summer, will want assurances that the money for Shelvey will be reinvested to replace the formerLiverpoolplayer – should he be sold.

West Ham will rekindle their interest in Jonjo Shelvey this summer. The Newcastle midfielder is likely to leave this summer if Benitez stays in charge, after falling down the pecking order at St James’ Park.

From the player’s perspective, it seems obvious enough that Shelvey will want to move on. Even aninjurytoin-form youngster Sean Longstaffcouldn’t help Shelvey regain his place in thestarting line-up, highlighting how far he has slipped down the pecking order at Newcastle.

Shelvey and Benitez’s situations are not the only ongoing issues Newcastle will need to sort out come the end of the season. There is also a big decision to be made on Isaac Hayden who is in terrific form, but may want to leave Tyneside for family reasons. Mohamed Diame and Joselu’s futures are also not certain. 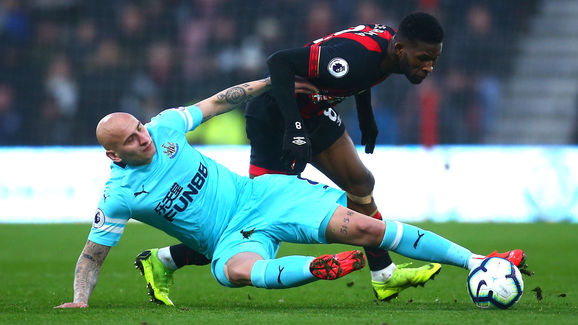 Amidst these growing concerns, Newcastle must ensure their Premier League safety. They currently sit 13th in the table and are seven points clear of Cardiff in 18th. Next up for Rafael Benitez’s men is a tough trip to the Emirates where they face Arsenal.